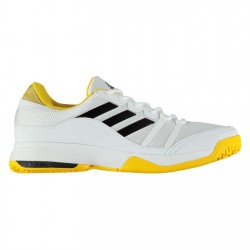 
The Mens adidas Barricade Court Tennis Shoes have been developed to help you reach your potential out on the court, featuring ADITUFF technology to the toe to prevent drag while the 360 degree TPU foil and Torsion system to the midsole give great stability for your rallies. A Cloudfoam midsole teamed with a lace fastening front and breathable mesh upper provides a secure and comfortable fit while the ADIWEAR outsole provides fantastic traction, completed with the iconic adidas three stripes to the sides and the adidas branding to the tongue.